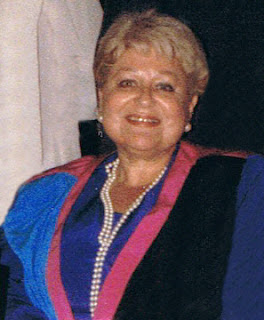 "Sunday from 3:00 to about 6.00 P.M.Peggy Hanlon and I visited Bobbi.. Last evening about 8:00 P.M. Peg and Bobbi's cousin phoned to tell me Bobbi passed on about 7:30 P.M. What a bittersweet time we shared...I was able to talk to her at about 15 minutes each time..telling her all her friends that sent their love...It was a blessing ...she no longer suffers..." Leonia


"I attended Bobbi's funeral today the large room at Campbells Funeral Home at 81st and Madsion Ave. ..about a dozen Soroptimists from both clubs attended..There were large photos of Bobbi as a child and sitting on her Grandmother;s lap...I had not seen these before...As she requested, she is buried with her mother which she never knew and her grandparents...She touched so many lives that needed her wisdom and generosity...and she brought so many people together who bonded for life...such as you and I"
Leonia

"It is with a heavy heart that I write to you today.  Our beloved Bobbi Wailes passed away on Sunday, March 5, 2017.  As many of you know, she was our club founding president.  I have included her obituary below.

I know she will always hold a very special place in my heart and I’m sure all of yours.

Roberta "Bobbi" of Fort Lee, New Jersey. Passed away on March 5, 2017 peacefully after a long illness.

Bobby was also very proud to be a three time President of the Soroptimist International of Manhattan. For anyone who knew her, they understood her love and devotion to animals particularly Katie and Kasper, her "kids." Her list of accomplishments is too long to print.

Her family and friends were everything to her. She is survived by her cousins, Edward and Gwen, Peter and Mary and N. Richard and Carol as well as their children, Max, Jonathan, Amy, Jill, Nicholas, Kathryn, Gregory, Alison, Alexis, Stephanie and Kevin. Funeral service Wednesday 11:30 am at Frank E Campbell "The Funeral Chapel" 81st Street and Madison Ave. In lieu of flowers, please send donations in the name of Bobby Wailes to the ASPCA 424 East 92nd Street NYC, NY.